The first loans of up to 25 thousand pesos will begin to be distributed electronically on May 4 to avoid crowds at bank branches.

President Andrés Manuel López Obrador announced during his morning conference that one million loans of 25 thousand pesos will be given to formal and informal family businesses that have employees registered with the Mexican Institute of Social Security (IMSS).

“It is a million new loans to all the companies that have workers enrolled in Social Security and that acted with great responsibility, especially in the small ones, not firing their workers, nor taking away or reducing their wages,” said the president in the Press conference.

According to López Obrador, the first loans of up to 25 thousand pesos will begin to be distributed on May 4 electronically to avoid crowds at bank branches. The rest of these supports will be given during the rest of May in alphabetical order.

“The padrón is being worked on, and the new loan is an expansion of another million small businessmen, in this case, all those who have workers in Social Security,” said the president.

López Obrador remarked that the money from the loans will come from the agreements with the group of large companies that owed taxes to the Public Treasury and that are around 15 billion pesos.

“There were 15 companies that owed 50 billion pesos. Of those 15, they already have guarantees of the 50 billion, they have come to offer arrangements to pay 15 billion pesos until Wednesday,” he said.

Zoé Robledo, general director of the IMSS, indicated in his speech in the announcement that there have been behaviors in companies where the worker is not terminated, but his salary level is.

“To companies that have not terminated their workforce or lowered their wages, these loans are offered to the floor for 25 thousand pesos,” said the official, explaining that these would be financing to be paid within three years to from May 4.

The official explained that interest rates would vary according to the number of company employees: 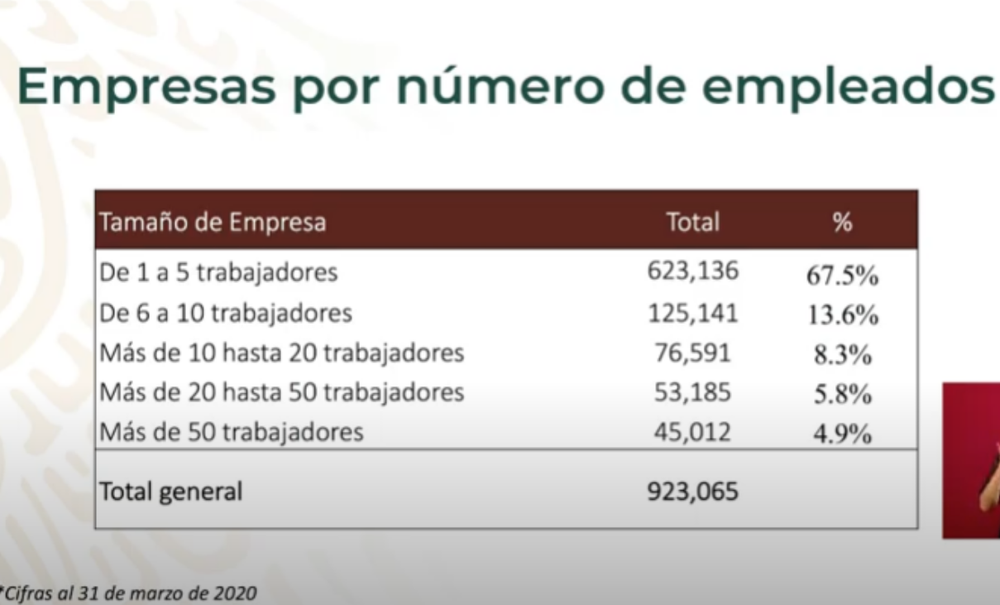 7 min read The opinions of the employees of You are personal. Longer passwords prevent identity theft. Malware helps criminals stay calm. Cryptojacking is an emerging threat. Why Small Businesses Should Deal With Emerging Cybersecurity Threats Organizations around the world have made work-from-home (TDC) agreements for employees while they continue to try to focus…

6 min read 2020 was a more complicated year than usual due to the COVID-19 pandemic. However, it was not the first crisis we have faced in the past 20 years. How to survive the crisis by creating a personal business plan 12 years ago, Sofia Macias He was facing a difficult economic moment when…

Discover how to earn the admiration and loyalty of your colleagues, bosses and subordinates on a personal and professional level. The opinions expressed by collaborators are personal. “Respect your efforts, respect yourself. Self respect leads to self discipline. When you have both under your belt, that is true power. ” Clint Eastwood. Tips to…

The “Reactivando México” initiative offers entrepreneurs and freelancers who need a coworking space by 2022 a free membership for 6 months, see requirements.