Recently Skyler Scarlett was with the “sharks” for the second time. Here are their tips on sales, storytelling, and putting together the perfect elevator pitch.

The video was terrible and Skyler Scarlett knew it.

It was the winter of 2015 and he and his sister Brittney had installed a camera at their 200-square-meter cryotherapy spa in Carmel, California. The objective: to record an incredible casting video for the next season of Shark Tank , to get his company, Glacé Cryotherapy, to reach investors. They had taken a couple of shots, but Scarlett and her sister were stiff: they were nervous, lacked energy, and didn't show their personality in the least.

Scarlett knew they needed to forget about the camera, so she turned to a traditional remedy: wine and pizza. The couple went to the restaurant next door and ordered a Pinot Noir and then went back to work. This time, they were full of energy, having fun, improvising, even Scarlett jumped from the nitrogen cryosauna like the clown from a surprise box.

The casting video set them apart from the competition and a few months later, Scarlett and her sister were standing in front of the sharks. This marked a before and after. When they went to the show, their club had about 30 members, and two days after its episode aired, a major chain of health clubs reached out to them to discuss a possible association. They both moved to Mountain View, changed their business model, and six months after this, the spa had 200 monthly members. Even an investment firm told Scarlett that with a single 130-square-meter location, he was generating more revenue per square meter than Orangetheory Fitness.

“If we had sent that first video, we would never have been on the show,” says Scarlett. “My life would be completely different.”

At age 23 Scarlett co-founded Glacé Cryotherapy with her sister, just as the health and wellness trend, which involves exposing the body to near-freezing temperatures for short periods, began. They had no business experience and opened their first store with $ 5,000.

He recalls, “It looked like a garage. We had a piece of plastic and we tried to sell to people who got cold and to pay us for it. ”

In an episode of Shark Tank United States that aired in January, Scarlett earned a “second take” in which she returned to the show under different circumstances. An entrepreneur at a cold clothing company, Fortress, needed a way to test his product in front of investors. Since the producers couldn't “bring a frozen lake to the Shark Tank set,” says Scarlett, they asked if he could return with his cryo camera. He did just this, and although Scarlett was unable to pitch his company again, the experience has resulted in additional partnership opportunities. 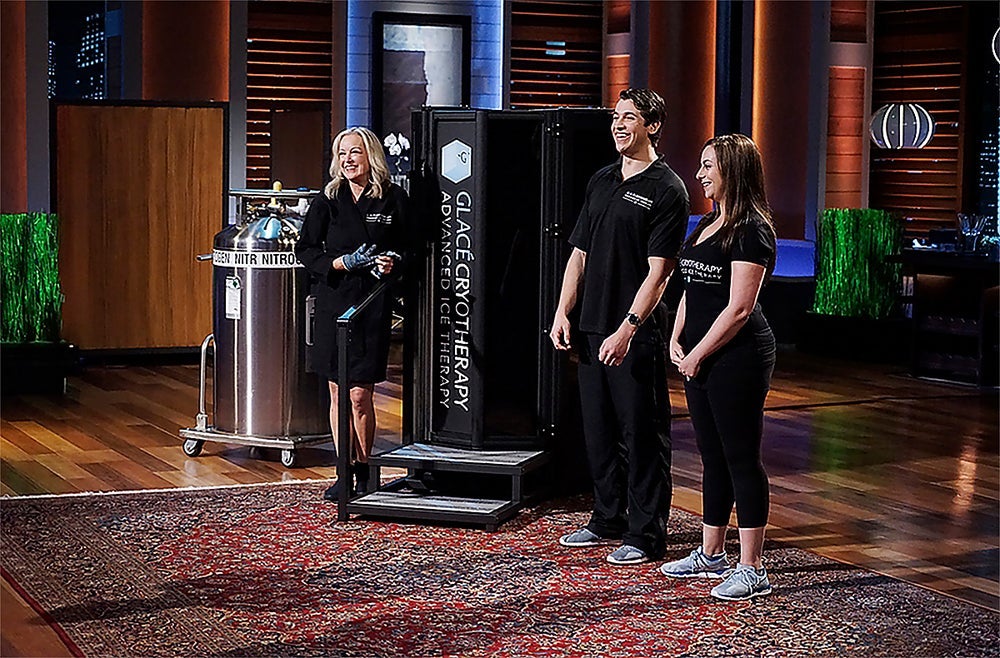 Image: ABC
spoke to Scarlett about her best strategies to “sell” her company, to both clients and investors.

This interview has been edited for length and clarity.

Let's talk about the advice you would give to entrepreneurs who don't necessarily go to a meeting with venture capital firms or to show up at Shark Tank , but who are in talks with influencers. What is your best advice to “sell” your company effectively to anyone you talk to?

As for telling a story that interests them, I think you have to balance the fuss with reality. Everyone thinks that their service or invention is the best of the best, so you have to be able to show them how you will get from A to B to C, and how you personally, in your role, will make the business get there. People want to invest in people who like them. They want to invest in people they believe in. It is the idea of ​​whether you are betting on the horse or the rider. It's a bit of both, right? Who's on that horse? Sometimes you have these great ideas, but if you see that the team doesn't know how to execute them, you won't go anywhere. This is why investors really care about what you have done. And if you are starting, you may not have done much, but you can explain why you are the right person to do it. It really is about that.

And what about the tips for when you're in a room presenting your pitch to investors, incubators or even a TV show? I know that the preliminary Shark Tank process probably involved both phone calls and in-person meetings. What is your number one tip, based on your own experience, when it comes to taking advantage of this type of opportunity?

In my experience with investors, it is very important to know all your numbers. You'd be surprised at how many people I've talked to, who are doing very well and who think they don't need to know their numbers; or the opposite, that they forget the difference between income and profits. Investors generally want to deal with people who have a clear understanding of all the numbers that have to do with their business. If you want to explain why something will work, you have to be able to explain things like the conversion rate. Every entrepreneur thinks their business is the next multi-billion dollar company, but where are the numbers that suggest this is true? The market does not lie. Most of the time, it is a numbers game, you just have to see them and find patterns.

In the last six and a half years, what has been the most difficult period when building your business?

Because everything was working in the beginning, I think I became a true entrepreneur when things started to go wrong. I feel like I spent two and a half years after Shark Tank where nothing went as I wanted. Everything was breaking the wrong way. We were in talks with these investment groups, spending six months with them trying to get the money and they would just leave us at the last minute. So it is important to be able to adapt. Also, we always assume that we would be ready to go in three months, but it actually took us nine. Now I think it's important to keep in mind that achieving a goal usually takes twice as much as you think.

Tell me about the biggest mistake you made in growing your business.

When you try to turn something small into something huge, everything changes. For example, my sister and I were this team of two trying to be this huge company. I was creating the website, we were both on site selling, we took care of all aspects of the business. Eventually you need to delegate those things and if you want to scale correctly create an infrastructure. Looking back, I would have liked to find someone with experience to help me expand the company. We made so many mistakes that they are now obvious, but we had no idea about them. I don't want to be so hard on myself because we just didn't know. But if you're just starting out and want to scale your company, find a mentor if possible, someone who has already done so; that is invaluable.

The path of an entrepreneur is usually long and difficult. When you summarize your experience, removing the straw and focusing on the most compelling story can be tricky, especially since you have little time to talk. How should an entrepreneur decide which parts of the story to include in their elevator pitch?

That's a great question. I think the most valuable thing someone can learn if they want to start a business or be an entrepreneur is psychology. Once you learn about psychology and human nature, it almost feels unfair. For example, I sell things that I love and use, but sometimes when someone enters my business, I know in two seconds if they are going to buy it or not. And on the phone, I can read someone and know if they are paying attention or losing interest. Once you know what to look for, you can basically sell anything.

And what is your advice to learn about psychology? How did you do it and how can others take advantage of that approach?

I have interacted with others in this way for the past six and a half years. So when I try to sell to someone who doesn't know me, I need to do it to the point where they trust me enough to take off their clothes and enter a chamber where they will be at -128ºC, really? It is probably one of the craziest things in the world you can sell. It makes me laugh, if I can sell this, I can sell whatever. So I really learned to discover what the person wants. You can't sell them something they don't want. If they want something else, you need to identify what they are really looking for. It is also important to make it clear that you are not a car dealer, do not force the sale, be realistic about what they expect and make sure they are comfortable buying.

I have become good at reading people when they come in, discovering what they are looking for, understanding their objections. There will always be some objections, it is human nature and they will all be very similar. I see them all the time, so it's about knowing how to respond to them. It works all the time. Even on negative sales: Someone living in New York came the other week and I told him there was no point in starting sessions at that time, that they should consider doing it in New York. And he bought the membership to join here for a couple of days as they appreciated my honesty. That's just reading them and not trying to sell them something that doesn't make sense to them. I think a lot of people take things very far instead of being present with the person they are trying to sell to.

These quick strategies can help you focus and reduce stress. Increase your business, Not your inbox Stay up to date and subscribe to our daily newsletter now! Read for 5 min 5 scientifically based tips for reducing work stress The opinions of the employees of s You are personal. We all have the smallest and…

Espacio Seguro is the new protocol for prevention, hygiene and hygiene with which Cinemex wants to demonstrate its commitment to the safety of its employees and visitors. Increase your business, Not your inbox Stay up to date and subscribe to our daily newsletter now! Read for 2 min What will the return to the cinema…

These gagdets contribute to excellent cleaning at home. Increase your business, Not your inbox Stay up to date and subscribe to our daily newsletter now! Read for 3 min The best robot vacuum cleaners 2020 Disclaimer: Our aim is to present products and services that we think you find interesting and useful. If you buy…

A few weeks ago the internet exploded against an influencer promoting a mezcal brand with false words. 4 min read Can “degrading or offensive” trademarks really be registered? This story originally appeared at high level By Tanya Escamilla, Director of Technical and Legal Services at ClarkeModet México Both a brand and the advertising around it…

Bitcoin ( BTC ) hodlers are racking up more coins than at any time in over a year as crypto investing seems increasingly attractive. According to data from the monitoring resource Glassnode on April 23, this month there was a significant increase in BTC positions . The Hodlers' net position change reaches 75,000 BTC per…