Dragon ball It was a show that I really enjoyed as a kid. I loved watching the adventures of Goku and his company to collect the mighty Dragon Balls and then watch them defeat any evil enemy that was planted in front of them.

I’ve always believed that this series of Akira Toriyama He has great lessons in teamwork, nobility in combat, and the importance of maintaining innocence. At 36, I can even say that there are great lessons an entrepreneur can apply in their daily life. Sites like Roglawfitness.com They list some of these teachings. Here I share the ones I discovered: 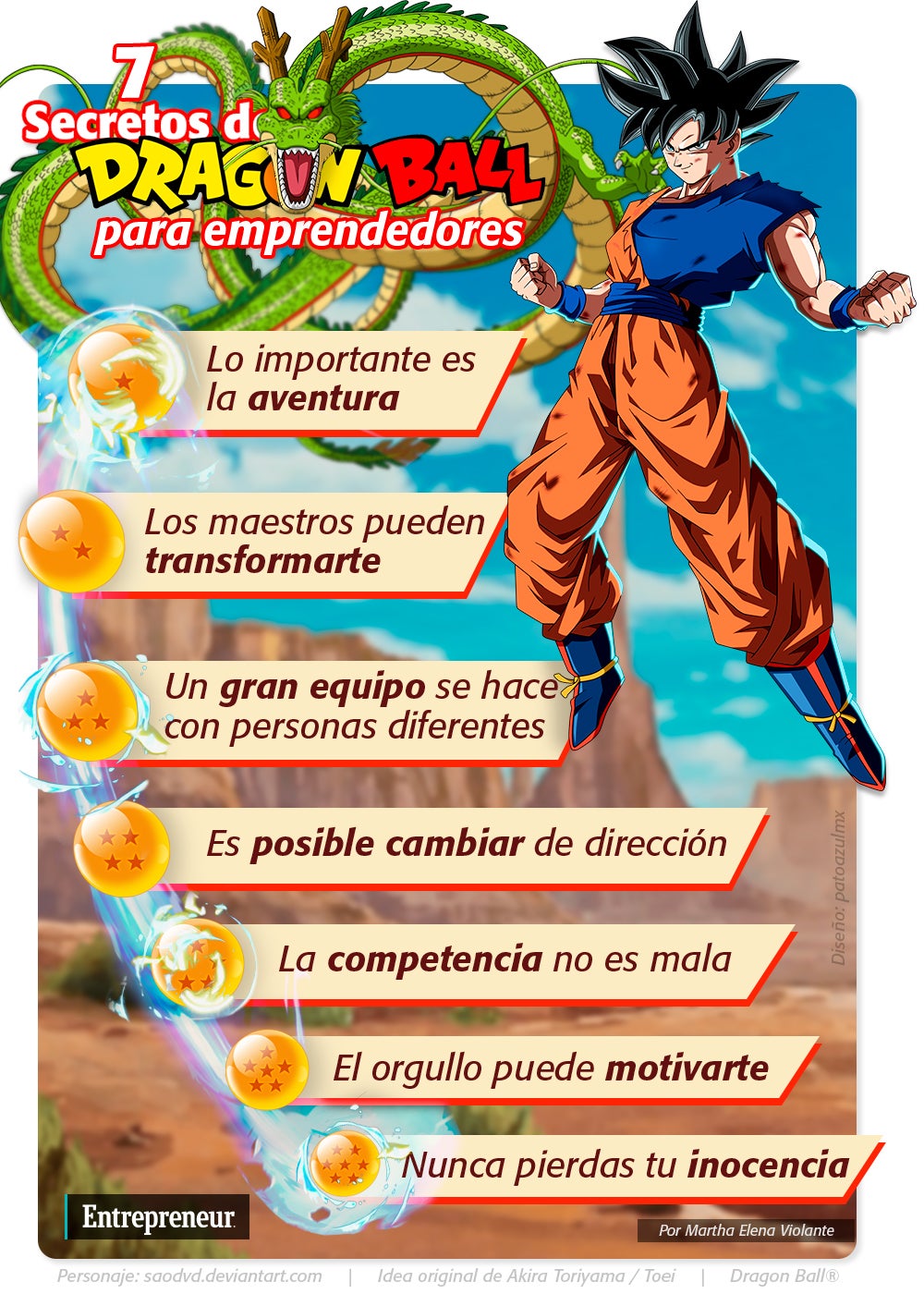 1. The most important thing is the adventure
In the series, Goku and his friends traveled extensively to summon the powerful Shen Long and make him a wish. They had such great adventures that in the end, the desires this mythical creature was able to grant were the least important.

Becoming an entrepreneur can be just as fun. If you just look at the bottom line, you will not be enjoying the lessons, people, and skills you need to acquire on the path to success.

It’s not that you don’t see success as the end, but don’t forget that the journey to this point will leave you with most of the lessons.

2. Teachers can transform you
What would have happened to Goku and Krillin if they hadn’t trained with Master Roshi? Surely they would never have reached this great power.

Mentors are essential in developing your skills as an entrepreneur. You have already gone through the same battles as you and you have the necessary experience to overcome the obstacles that arise. In addition, they give you a different perspective on the world that can help you understand viewpoints that you may never have considered before.

Can you imagine Piccolo Gohan not training? One of the greatest fighters in the world would have remained a crying child.

3. A great team is made up of different people
The Z warriors were the guardians of the earth who always defended the planet from the threats of space. They were not alike, they were even of different races. But their skills were supplemented in combat. Perhaps Vegeta was the least suited to interacting with other people, but that was a skill Goku was abundant in.

A successful person knows how to surround themselves with an effective team with diverse skills that complement any weaknesses they may have. It’s not just about having good friends, it’s about recognizing and improving the latent excellence of other people.

Not only that, today’s enemy can be tomorrow’s friend. Don’t despise the contacts you may make along the way because you never know who might be able to help you in the future.

4. The competition is not bad
A recurring theme in Dragon ball It is the emergence of stronger and stronger villains that forced Goku and his company to train harder and harder to defeat them.

It’s the same in the business world. Having no competition isn’t a positive thing, it just means your niche in the market is small. The absence of an opponent can make you complacent and stop trying to get better.

Son Goku wouldn’t have become the legendary warrior if he hadn’t faced so many enemies, and so does your business. Let your competition be your motivation.

5. It is possible to change the direction
In the series we have two examples of antiheroes who decided to change their bad habits and who eventually became the hero’s allies: Vegeta and Piccolo.

Just keep in mind that it will take a lot of work and good deeds to change the public’s perception of your brand.

6. Pride can motivate you
Speaking of Vegeta, the Sayayine prince was so proud that he could never stand the fact that Goku had hit him. However, he used this defeat as a motivation to get better every time – and even led him to start a family on earth.

This is a great lesson. Having pride and ambition is important, but you shouldn’t let them blind you to what you need to do to achieve excellence.

Pride can be a weakness because it makes you believe you don’t need anyone and it limits you in asking for help. However, knowing how much you are worth in controlled doses can rest assured that you are functioning on a daily basis.

7. Never lose your innocence
Goku is one of the most popular characters in Japanese animation because he is an extremely innocent person who cannot cheat and always admires the strength of his opponents.

These qualities are important for being happy. Being able to marvel at the simple things in life helps you innovate. On the other hand, if you are open enough, you can make lots of friends, allies, and coworkers from whom you can learn incredible things.

Last but not least, never cheat and do your best so that you are recognized for your professional ethics and, therefore, for someone other people would like to work with.

Have you seen dragon ball What do you think are other lessons this series leaves behind?

Parent company Snap Inc. announced that HeadlightsThe new entertainment platform based on the creation of user-generated content in Snapchat is now available in Mexico. Spotlight, which reached more than 100 million users in January of this year, shows the most entertaining snapshots from the community of Snapchat in one place and over time, it will…

7 min read The opinions of the employees of You are personal. 8 steps to get visibility in your business (and recognize what you’re doing) There should be few things more disturbing than feeling invisible. Noticing that nothing you do or say is considered by others. If this situation is troubling in itself in…

Seedstars, the Switzerland-based company that invests in emerging market startups, and the daily newspaper Financial times they start the first FTxSDG challenge, a competition that offers promising and impact-oriented start-ups and entrepreneurs learning and funding opportunities. Do you have an idea that could change the world? This call brings you closer to a mutual fund…

Ecolana is the first digital map to recycle in Mexico, it allows you to select graphically the collection points closest to you and indicates the type of waste they receive. January 29, 2020 6 min read The opinions expressed by employees are personal. These entrepreneurs tell you what, how much, how and where to…

If you want to get into the world of investing, the expert Eduardo Rosas, creator of the successful channel ‘Personal Finance’ on YouTube, has revealed the 5 basic elements for getting started with investing.