We share these keys to transform your mistakes and failed businesses into steps to win.

When Steve Blank appeared on the cover of Wired magazine nine years ago, his then company, Rocket Science Game, was expected to revolutionize the video game industry. And he did not let skepticism and criticism affect him. “I thought he was a genius,” says Blank. Three months later, when he called his mother to tell her he was about to lose $ 35 million, he no longer felt that genius.

“I had to make many decisions, including having to resign,” he says. “Learning from that failure was one of the best experiences of my life.” And yes he learned. In 1996, Blank founded the startup E.piphany, which got $ 1 billion in investment.

According to Blank, in the last 10 years the entrepreneurial culture has become a 'friend' of failure. Serial entrepreneurs in Silicon Valley go from one failed business to the next, and billionaire entrepreneurs like Richard Branson expose their failures as much as their successes. Still, “no one likes to fail,” Blank says. “We are made for success.”

But what if you could really use failure as a stepping stone to success? We share five keys to achieve this:

1. Call failure in another way
When was the last time someone was hired for an important position with no experience? For serial entrepreneurs, “experience” is another word for “failure,” according to Blank. By labeling a failed effort as an opportunity to learn, you are putting it in a positive light that allows you to add credibility as an entrepreneur.

2. Use failure as a stepping stone
With each failure, identify what you know you did wrong and be aware of it so you don't repeat your same mistakes. This will take you one step closer to success, says Steve Siebold, a consultant who works with entrepreneurs to create critical thinking.

“I've never heard a millionaire businessman say he got it right the first time,” says Siebold. “The bigger they are, the more commonly they have failed.”

3. Don't fail alone
Most entrepreneurs like to start their adventure alone. But if you make a mistake on your own, it will also be more difficult to determine what went wrong. Having a partner you respect and trust can turn every failure into an opportunity to collaborate. “A good partner can help you determine what not to do next time,” says Karl Baehr, director of the entrepreneurship-focused university, Emerson College.

4. Don't hide your failures
First of all, be proud that you were brave enough to take the risk. By being open about your mistakes, you open up to learning from others.

Baehr's mentor, insurer owner Walter Hailey, was taking a daily walk at five in the morning with a group of close friends to discuss ideas, successes, and failures. “By the time they got home, they had the solution,” says Baehr. “They had a plan for the rest of the day.”

5. Redefine what you want
Change the focus and the reason why you started the business. “Check your emotional motivators . Remember that we are emotional creatures and that logic does not motivate us, ”says Siebold, who launched five failed businesses in a row before creating his current consulting firm. For Siebold, his motivator was to become a millionaire one day, a goal he reached at age 31. “You have to be clear on what you want,” he says. “The question should be: How badly do you want it.” 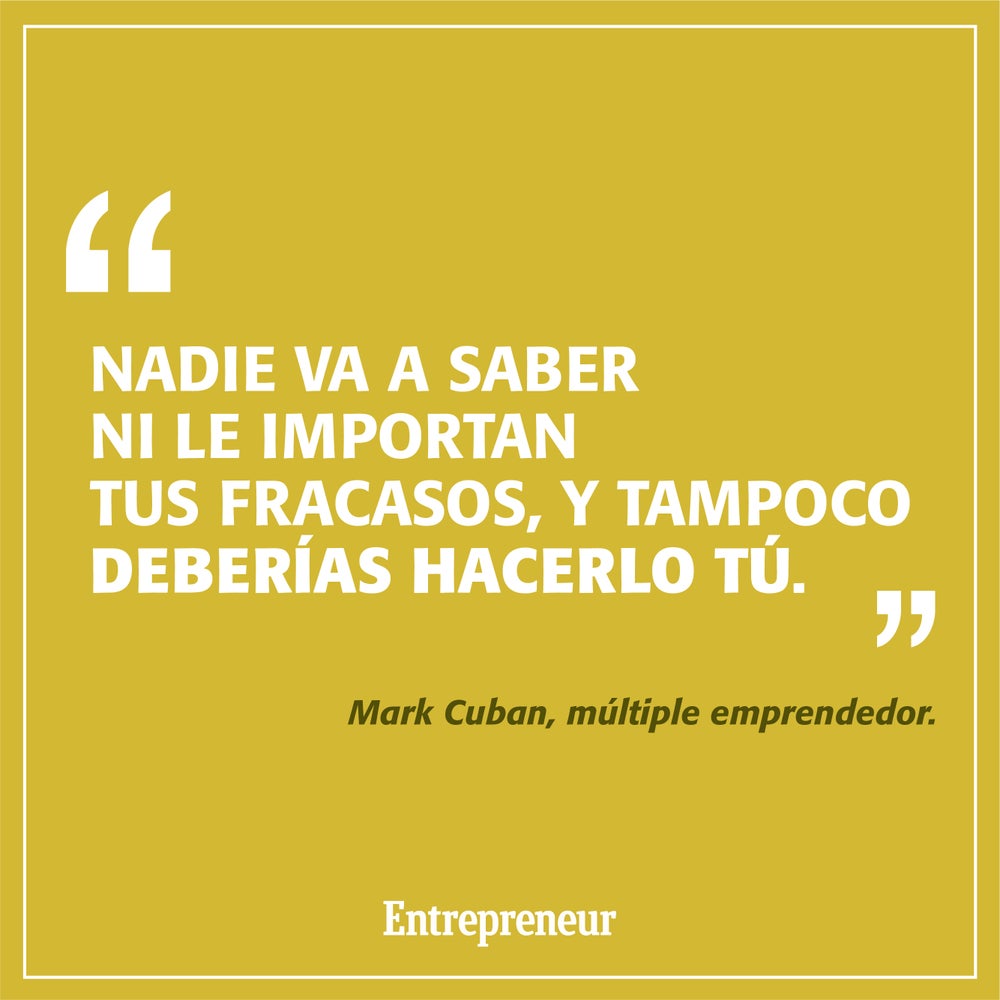 What scientists are discovering about the connection between the gut and the brain. March 28, 2020 8 min read The opinions expressed by collaborators are personal. Why gut health is mental health Editor's Note: The following article is based on excerpts from Ben Angel's book , Unstoppable: A 90-Day Plan to Biohack Your Mind…

The opinions of the employees of You are personal. You may have heard of the book “The four agreements” or you’ve read it or seen sentences on social networks. In any case, you will find valuable recommendations for a better life in all areas: family, friends, relationships, work, abundance, health and well-being in general….

The group sought to build a private equity industry where more women are involved in investment decisions. 4 min read Women invest was born with the goal of reaching a more indifferent private equity industry. ‘Mujeres Investiendo’ is officially founded and is starting a fundraising campaign in Donadora The non-profit group more than 5 years…

Data has been released on a research that allows you to reflect on the time you spend on social media. 3 min read Experts warn about how many minutes a day are enough to get depressed while surfing social networks Excessive use of social networks is not good for your health. Young people who use…

10 min read The opinions of the employees of You are personal. Silence is a key that opens many doors. Learn to use it to your advantage In his book The cArtas del Diablo to his nephew, C.S. Lewis describes the two eternal places very differently. Hell is full of it on the one…