That it is known how to detect it, that the majority of cases are mild or that the cure rate is quite high constitute good news against the threat.

By Ignacio López-Goñi , University of Navarra

Let us classify the new coronavirus as a pandemic or not, the issue is serious. Do not take away importance. In less than two months it has spread over several continents, but the virus doesn't care what we call it. A pandemic implies a sustained, effective and continuous transmission of the disease simultaneously in more than three different geographical regions. We may already be in that phase, but that is not synonymous with death, since the term does not refer to the lethality of the pathogen but to its transmissibility and geographical extension.

What there certainly is is a pandemic of fear. For the first time in history we are experiencing a real-time epidemic: all the media, several times a day, every day, all over the planet, talk about the coronavirus. We follow the drip of each case live. It has even been front page news that the virus in Brazil has mutated three times!

I insist: the issue is serious, but one of the first victims of the coronavirus in Spain has been the Ibex35 . You have to report what is happening, but we also need good news. Here are ten of them.

The first cases of AIDS were described in June 1981 and it took more than two years to identify the virus causing the disease. The first cases of severe pneumonia were reported in China on December 31, 2019 and by January 7 the virus had already been identified.

The genome was available on day 10. We already know that it is a new coronavirus of group 2B, from the same family as SARS, which is why we have called it SARSCoV2. The disease is called COVID19.

It is related to coronavirus of bats. Genetic analyzes confirm that it has a recent natural origin (between the end of November and the beginning of December) and that, although viruses live by mutating, their frequency of mutation is not very high . 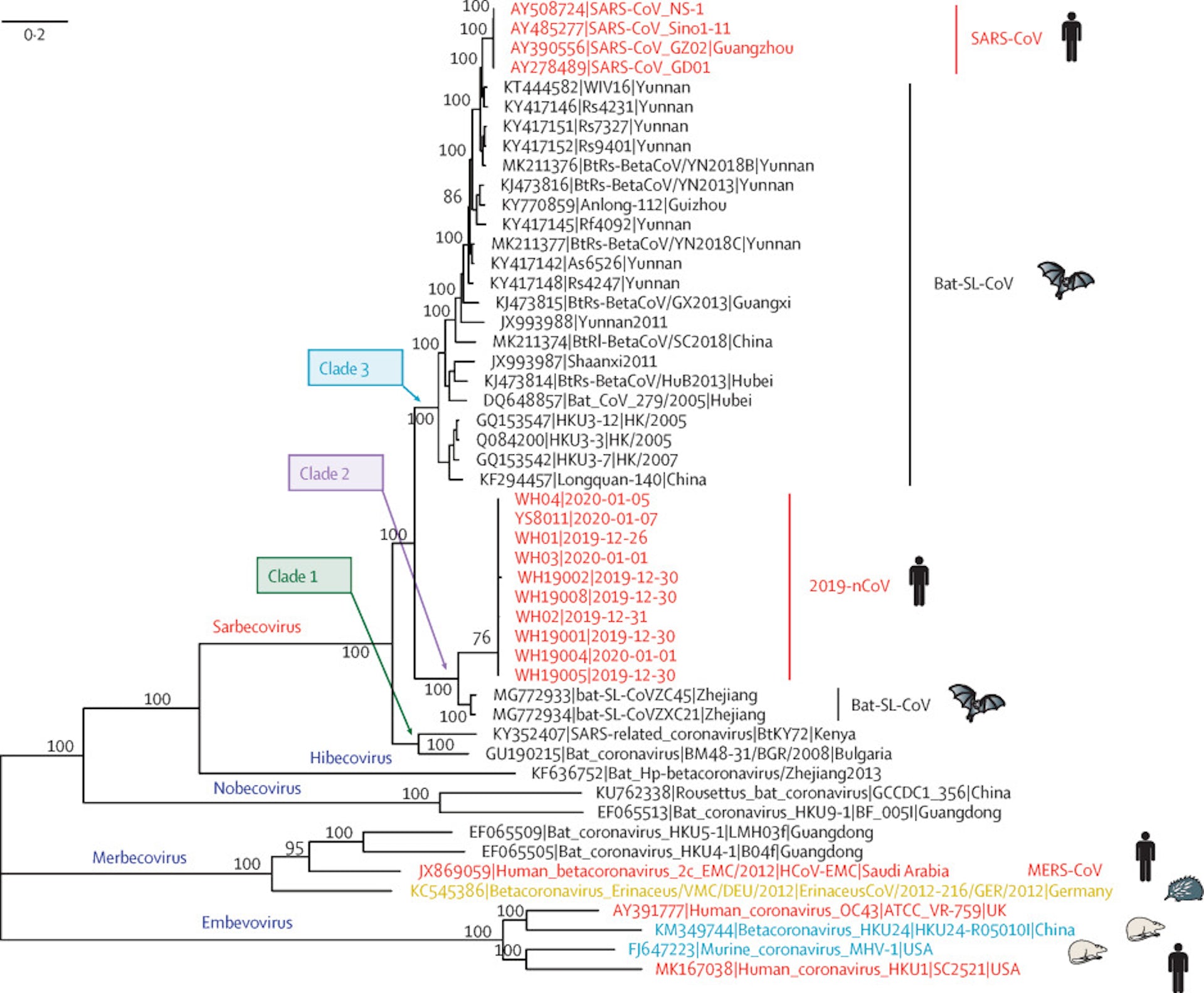 Phylogenetic analysis of the complete genomes of 2019-nCoV and of the representative viruses of Betacoronavirus. The Lancet – Genomic characterization and epidemiology of 2019 novel coronavirus: implications for virus origins and receptor binding

2. We know how to detect it

An RT-PCR assay to detect the virus is available to everyone from January 13.

In recent months , these types of tests have been perfected and their sensitivity and specificity evaluated .

3. In China the situation is improving

The strong control and isolation measures imposed by China are paying off. For several weeks now, the number of cases diagnosed decreases every day.

In other countries a very detailed epidemiological follow-up is being done. The foci are very concrete, which can allow them to be controlled more easily. For example, in South Korea and Singapore .

The disease causes no symptoms or is mild in 81% of cases. In the remaining 14% it can cause severe pneumonia and in 5% it can become critical or even fatal.

The only data that are sometimes shown in the media are the increase in the number of confirmed cases and the number of deaths, but the majority of infected people are cured. There are 13 times more cured patients than deceased, and the proportion is increasing . 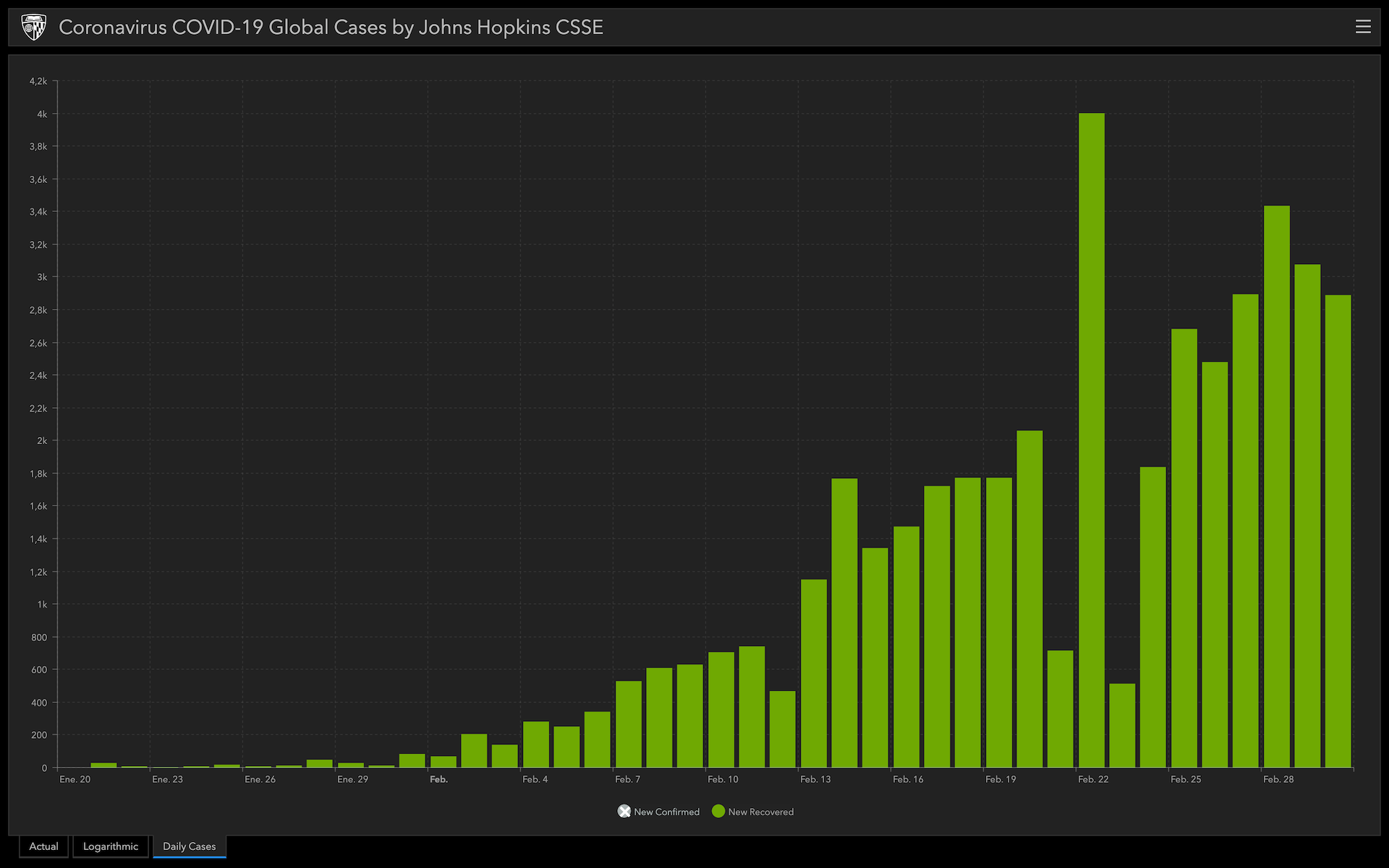 6. Does not affect (almost) minors

7. The virus is easily inactivated

The virus can be effectively inactivated from the surfaces with a solution of ethanol (62-71% alcohol), hydrogen peroxide (0.5% hydrogen peroxide) or sodium hypochlorite (0.1% bleach), in just one minute

Frequent handwashing with soap and water is the most effective way to avoid contagion.

8. There are already more than 150 scientific articles

It is the time of science and cooperation. In just over a month , 164 articles can be consulted in PubMed on COVID19 or SARSCov2, in addition to many others available in the repositories of articles not yet peer reviewed ( pre-prints ). They are preliminary works on vaccines, treatments, epidemiology, genetics and phylogeny, diagnosis and clinical aspects.

These articles are prepared by about 700 authors scattered throughout the site. It is science in common, shared and open. In 2003, when the SARS happened, it took more than a year to obtain less than half of the articles.

In addition, most scientific journals have left their funds on coronaviruses open.

9. There are already prototypes of vaccines

What can lengthen its development are all the necessary tests of toxicity, side effects, safety, immunogenicity and effectiveness in protection. Therefore, there are several months or years, but some prototypes are already underway.

For example, the mRNA-1273 vaccine from Moderna consists of a messenger RNA fragment that encodes a protein derived from the glycoprotein S of the coronavirus surface. This company has similar prototypes for other viruses .

Inovio Pharmaceuticals has announced a synthetic DNA vaccine for the new coronavirus, INO-4800, also based on the S gene of the virus surface . For its part, Sanofi, will use its recombinant baculovirus expression platform to produce large amounts of the surface antigen of the new coronavirus.

The vaccine group of the University of Queensland, in Australia, has announced that it is already working on a prototype using the technique called molecular clamp , a novel technology that consists of creating chimeric molecules capable of maintaining the original three-dimensional structure of the viral antigen . This allows to produce vaccines using the genome of the virus in record time.

Novavax is another biotechnology company that has announced its work with the coronavirus . It has a technology to produce recombinant proteins that are assembled into nanoparticles and that, with their own adjuvant, are potent immunogens.

In Spain it is the group of Luis Enjuanes and Isabel Sola of the CNB-CSIC who have been working on vaccines against coronaviruses for years.

Some of these prototypes will soon be tested in humans.

10. There are more than 80 clinical trials with antivirals in progress

Vaccines are preventive. More important are the possible treatments of people who are already sick. There are already more than 80 clinical trials to analyze coronavirus treatments . These are antivirals that have been used for other infections, which are already approved and that we know are safe.

One of those that has already been tested in humans is remdesivir , a broad-spectrum antiviral, still under study, which has been tested against Ebola and SARS / MERS. It is an analogue of adenosine that is incorporated into the viral RNA chain and inhibits its replication.

Another candidate is chloroquine, an antimalarial that also has potent antiviral activity. It is known to block the infection by increasing the pH of the endosome that is needed for the fusion of the virus with the cell, which inhibits its entry. It has been proven that this compound blocks the new coronavirus in vitro and is already being used in patients who have caused the virus pneumonia.

Lopinavir and Ritonavir are two protease inhibitors used as antiretroviral therapy that inhibit the final maturation of the AIDS virus. As the SARSCov2 protease has been shown to be similar to that of HIV, this combination has already been tested in patients with the coronavirus .

Other proposed trials are based on the use of oseltamivir (a neuraminidase inhibitor used against influenza virus), interferon-1b ​​(protein with antiviral function), antisera from already recovered people and monoclonal antibodies to neutralize the virus. Even new therapies with inhibitory substances, such as baricitinibin, have been suggested by artificial intelligence .

The 1918 flu pandemic caused more than 25 million deaths in less than 25 weeks. Could something similar happen again today? As we see, most likely not. We have never been better prepared to fight a pandemic.

This article is republished from The Conversation under a Creative Commons license. Read the original article .

Make the Struggle, a movement to promote Mexican entrepreneurship, awards 70 100% scholarships for the Awake Your Fighter training program. Increase your business, Not your inbox Stay up to date and subscribe to our daily newsletter now! Read for 3 min Awaken your social fighter and overcome the crisis with this training program The opinions…

“The way you spend your mornings can often tell you what day you are going to have.”. – Lemony Snicket We all know that waking up early makes us more productive. From childhood we have been taught to “go to bed early and wake up early” as a ritual. When we wake up at dawn…

The opinions of the employees of You are personal. For the average person, the words “millionaire” and “Multimillionaire“They sound similar. You both describe people with a lot of money, right? In fact, neither of you has to worry about debts and everyday matters. The 5 basic factors that distinguish “billionaires” from “millionaires” In addition,…

With the apps, users can receive a notification on their phone informing them whether they have been exposed to someone who has tested positive for COVID-19. Read for 1 min Apple and Google are creating an app to monitor the spread of COVID-19. However, you cannot use them Apple and Google, whose operating systems are…